Surviving a Mother From Tell and Learning By It 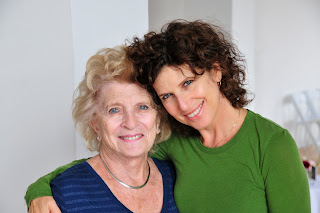 A Wounded Child Makes Up With Her Mother

Gayle Kirschenbaum had a mother from Hell, but she lived to tell the tale.
The positive result is her documentary “Look at Us Now, Mother,” opening in area theaters March 25.
Mom is Mildred Kirschenbaum. She is alive and well and lives in Boca Raton. Mother and daughter will appear at several screenings for Q&A sessions. These include after the 10 a.m. March 25 screening at Movies of Delray; the 7 p.m. screening at Living Room Theaters; at Movies of Delray March 26 for four screenings and at the Regal Shadowood in west Boca Raton that evening.
“Look at Us Now, Mother” combines home movies shot by Gayle’s late father, Gerald Kirschenbaum, still photos and present-day interviews with family, friends, and Gayle’s therapist.
Gayle Kirschenbaum, now 61, grew up on Long Island, New York wondering if she had been born in the wrong family. Her parents were expecting another son. They got Gayle.
Gayle was and is bright and creative, but her mother harped on her shortcomings, especially her physical appearance and one particular feature.
“My mom had been bugging me forever to get a nose job, so I finally agreed to visit three surgeons,” said Gayle by telephone from New York. “I insisted that we film the interviews. The result was my 13-minute documentary ‘My Nose,’ which is really the basis for this longer documentary.”
Gayle left home at her first opportunity at age 17 and developed a successful career in television production. Her first film documentary, “A Dog’s Life,” about her beloved pet Chelsea, got her interviewed by Katie Couric.
Gayle says the production of “Look at Us Now, Mother!” was catharsis more for her mother than Gayle.


“We have made a kind of peace,” Gayle admits. “We have been on the road so much since April, when the film debuted at the Atlanta Jewish Film Festival. One thing I do request when we travel is that we have separate rooms.”