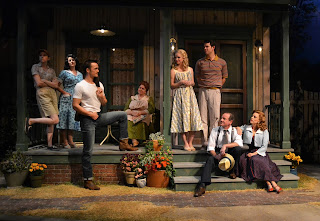 “Picnic,” a 1953 American classic play by William Inge, is enjoying a very classy revival at Palm Beach Dramaworks, 201 Clematis St., West Palm Beach, through Nov. 8.
Director William Hayes has brought out the humor in Act One to a degree I’ve never seen before. I had always thought of “Picnic” as a rather dour portrayal of small-town life in the Midwestern heartland of the early 1950s. Not so with this approach. Sure, Act Two turns serious as consequences are paid, but one is left with an upbeat feeling of hope that these characters will surmount their limiting circumstances.
The plot of “Picnic” hinges on Hal Carter (Merlin Huff), a handsome, buff drifter who drops in to a small Kansas town and shakes the status quo to its foundation.
Newcomer Merlin Huff plays most of Act One sans shirt, which shows off his admirably sculpted upper body. Hal has chosen this particular town because an old college buddy, Alan Seymour (Taylor Miller) lives there.
Hal was a college football hero who flunked out, but never failed with the ladies. Alan is a cautious, nerdy sort who is informally engaged to Madge Owens (Kelly Gibson), the “prettiest girl in town.”
Being the prettiest girl in town has certain drawbacks. Everyone thinks Madge has it made. Her Tomboy younger sister Millie (Maren Searle) is jealous. Her mother Flo (Patti Gardner) is afraid some no-account bum will take advantage of her.
All these things are simmering when Hal Carter comes to town and books a room at nice Helen Potts’ (Elizabeth Dimon) house. Hal has agreed to do some chores in exchange for rent. This entails the removing of the shirt, which will stay off for most of Act One. This does not escape the notice of “old maid” schoolteacher Rosemary Sydney (Margery Lowe) or her nosy schoolmarm friends (Julie Rowe and Natalia Coego). The picnic of the title occurs later that same day. By nightfall things will change. By daybreak some things will change forever.
“Picnic” is so well-crafted each character gets his or her moment in the spotlight. Some, like Howard Bevans’ (Michael McKeever) grudging agreement to finally marry Rosemary Sydney, are funny. Some, like Rosemary’s sorrowful, aching need, are touching. This production is so well-cast there is never a dull moment. It’s a matter of personal preference which character will move you most. I’ve never seen Hal so sensitively portrayed as by Merlin Huff. I’ve never seen a Madge as young, vulnerable and well, pretty, as Kelly Gibson. If you’ve seen “Picnic” before, you will see it with new eyes. If you haven’t, it will be a revelation.
Tickets are $64. Students are just $10. Call 561-514-4042. Or go to www.palmbeachdramaworks.org.

Posted by Skip Sheffield at 1:02 PM