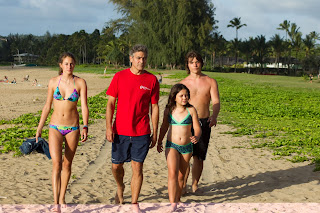 George Clooney Does the Right Thing in “The Descendants”

It was a choice between Martin Scorsese’s family film “Hugo” and gorgeous George Clooney goes to Hawaii in “The Descendants.”
Since Fox Searchlight had invited us to “Descendants’ first, and since Beth was driving, we decided to see what Mr. Clooney is up to.
“The Descendants’ is a breakthrough for Clooney as an actor, as he has to do more than just be handsome and dashing. Clooney’s character of lawyer-father Matt King is in fact not very heroic. His wife is at the hospital in a coma after a boating accident. Matt had been neglecting his wife before the accident. When he collects his sullen teenage daughter Alexandra (Shailene Woodley), she informs him her mother had been carrying on an affair.
Matt’s potty-mouthed 10-year-old daughter Scottie (Amara Miller) is a disciplinary problem and is not doing well in school. When Matt learns his wife will never recover, he must tell his girls the truth.
That is the setup for a drama with ample dashes of comedy, based upon the 2009 novel by Kaui Hart Hemmings, with screenplay by director Alexander Payne, whose last movie “Sideways” caused quite a stir in 2004.
Like “Sideways” “The Descendants” is about men behaving badly. Over the course of a family trip to the island of Kauai in search of the man who cuckolded him, Matt gains insight into what a crummy father and husband he has been, and how much everyone resents him.
Matt comes from an old Hawaii family that is in part related to Hawaiian royalty. Back in 1860 the family was granted 25,000 pristine acres on Kauai. Now Matt’s family wants to cash out and sell the land, but as executor of the estate, Matt has the final judgment.
Along for the ride at the insistence of Alexandra is her wiseguy boyfriend Sid (Nick Krause), who rubs both Matt and Matt’s father-in-law (Robert Forster) the wrong way.
The philandering lover turns out to be Brian Speer (Matthew Lillard), a smarmy real estate agent who is also involved in the sale of the King land. Speer is a hypocrite of the worse kind: he is a married man with a loving wife (Judy Greer) and two adoring children.
Matt’s relatives aren’t much better than he. Led by the boozy, blustering Cousin Hugh (Beau Bridges), the clan is practically licking their chops over the prospect of newfound, unearned riches.
I have a particular interest in Hawaii and its history because my mother and her parents lived there for six years, starting in 1941, during the Hell of World War II. My parents first met there and my sister was born there.
Hawaii has some things in common with semi-tropical south Florida; particularly by the way its economy is driven by real estate.
“The Descendants” is ultimately a feel-good movie because characters learn to change and do the right thing. George Clooney did the right thing by choosing this role and proving he really can act.
Posted by Skip Sheffield at 7:15 AM